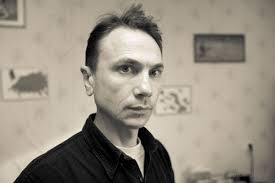 Gintas K, a Lithuanian sound and interdisciplinary artist living and working in Lithuania. Gintas has been a
part of Lithuanian experimental music scene since 1994. He became known for his sound manipulations,
theatrical performances and conceptual art in the manner of Fluxus. Nowadays Gintas is working
in the field of digital experimental and electroacoustic music. His
compositions are based on granulated sounds, improv, new hard digital
computer music, small melodies and memories. Collaborations with sound
artists @c, Paulo Raposo, Kouhei Matsunaga, The Beautiful Schizophonic,
David Ellis and others. In over a decade he has released numerous of records
on labels such as Cronica, Zeromoon, Baskaru, Con-v, m/OAR, Copy for Your
Records, Bolt, Creative Sources and others. He is also making music for films, sound
installations and participating in various international festivals
(Transmediale.05, Transmediale.07, ISEA2015). In 2010 he was a winner of the II
International Sound-Art Contest “Broadcasting Art 2010” in Spain. A year
later he has become a member of Lithuanian Composers Union. Gintas K is a
curator of VA-MUU FOR EARS 5-6 (2CD 2010) that explores the sound art and
experimental music scenes in Estonia, Latvia,
Lithuania and Russia & “VA– Lithuanian Sound Art” (CD 2012) compilation - an
introduction to modern sound art in Lithuania. His work included in VA An
anthology of noise & electronic music #7 by Sub Rosa in 2013.