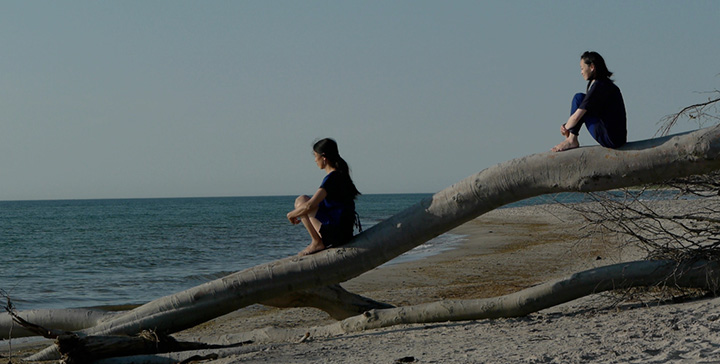 Masayo Kajimura lives and works primarily as a video artist in Berlin. She has produced short films, video installations and work created in collaboration with dance and music. Her work has been internationally exhibited, eg at the Busan Biennale, ICAS (Singapore), International Short Film Festival Oberhausen, the Amsterdam Film Experience or the Sibiu International Theatre Festival. Masayo Kajimura has received scholarships from the DAAD, the Women Artists Programme of the Berlin Senate and the Zeit  Foundation. In 2008 she was artist-in-residence at the Künstlerhaus Lukas in Ahrenshoop, and in 2010 at Binaural Nodar in Portugal. In addition to 'Made in Europe' at the Werkstatt der Kulturen, she curated the video art section of the Asian Hot Shots Festival in of 2009.

Maiko Date is a dance/movement artist from Chiba, Japan. After her dance studies at the Wako University she became a member of the Tokyo Dance Ensemble "Mademoiselle Cinema" and toured with the ensemble, including in Bulgaria, Portugal, Austria and Poland. The play "La Place mystérieuse" won the Newcomer's Dance Choreography Award (2008) of the Japanese Ministry of Culture and the Audience Award at the Festival Sztukowanie in Gryfino / Poland (2011). She danced in pieces by Jean-Laurent Sasportes, Idit Herman and others, founded in 2010 her own dance company "Japonens" and choreographed solo and duet pieces. In her work Maiko Date brings back memories, respects the moment, looking for the ducks drift in space body. Conscious of the elements of fire, air, water and earth and its Japanese culture they developed motion sequences and aims at a synthesis of East and West.

"between islands" is an ongoing video dance project , which started in 2012, and has since traveled to many places. It is a story of a journey from island to island, which evolves around lines and water: When we move, we leave traces. The lines that we draw, when we travel from one island to the next. The circles that we create, when we encounter people. The time axis spirals, the space twists, and the journey continues into the depth of the sea. As we part, a space between opens, another beginning.