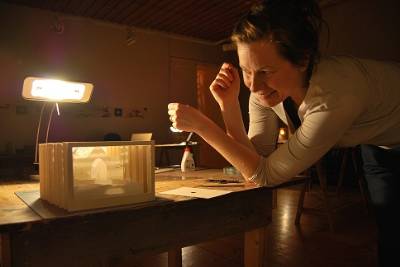 REICHRICHTER is a name for a collaboration of Rebekka Reich and '''Marcus Vila Richter. The content framework of REICHRICHTER focuses on the questioning of peoples relationship to space, the nature of social spaces and their transience. Spaces are approached and scanned indirectly by the artists, similar to the operation of a sonar. The reflected waves of the sonar thus consist of the subjective comments of the residents, of the people in these areas. The artists create their work using this self-developed method for the production of new material as well as including existing film and sound clips, which originate from an archive developed by the duo on the basis of their own taxonomic arrangement. The two media formats used by Reich and Richter in their work - audio and video - evoke theoretical questions around media about the blending of signifier and the signified. Questions about the truth of the media and the look beneath the surface of signifiers are an elemental part of their work.